I have enjoyed reading so many race reviews/recaps that I thought it might be cool to start documenting some of my own races. It’s a great way for me to remember my experiences from some of my favorite races!

The San Jose Giants 5k on June 28, 2014 was part of “The Giant Race” series which starts with a race at Spring Training in Arizona in March and will end with a 5k/10k/half marathon in San Francisco in September. I completed the San Francisco Giants Plat to Plate 5k in 2009 and had a blast running with fellow baseball fans so I knew I needed to do this race again. Then I learned if I ran in San Jose as well, I could earn special ear buds and another race was registered for!

Packet pick-up on Friday night was incredibly easy. I got my bib, shirt, and included ticket to the game on Saturday night after the race. I had picked up a couple of extra tickets for $5 a piece for my husband and parents. I was also talked into buying two special Bondi Band headbands with an adjustable strap in the back. I told the guy at the table that headbands always fall off my head and he told me if it fell off during the race he would give me back my money. I’m always up for a challenge! (Spoiler: It stayed on for the WHOLE RACE and didn’t even slip!)

Awww I wanted to be in Buster’s group! Gotta get faster!

I woke up with anticipation and rushed to get ready on race morning. While I had completed several races prior, this was my first officially timed 5k since starting my HMR weight loss journey and I was both excited and scared about how I would fare.

Parking was super easy (probably because I got there over an hour before the start!) and so I used the time to warm up and make multiple trips to the porta potties (I was nervous!). Then I checked out the starting line which was set up with three self-monitored pacing areas. 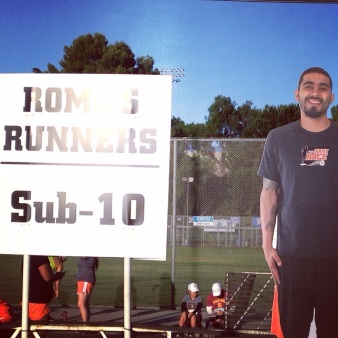 I knew I didn’t belong in the Sub-8 area although I do love Mr. Posey! Someone might have wanted to be clearer in oral instructions though because many walking Posey fans who were new to 5ks joined this area near the start which did lead to some clogging of the course at the beginning!

I put myself in the Romo Runners group because I knew my easy training runs were between 10 and 11 minutes for the most part and that I planned on picking up the pace. However I stayed to the side just in case I had seeded myself wrong.

Part of my pre-planned race attire was a tutu from Glam Runners. I was inspired by the causes they raise money for and although I felt silly putting it on, it also felt kind of cool. Not to mention the orange and black just scream Giants Pride! I got lots of compliments along the course and also motivated another runner as I heard the comment right behind me “gotta beat the tutu” (they didn’t but hey if it keeps you moving!).

The course itself was great – we went around the neighborhood near the ballpark as well as through part of Happy Hollow park. The 5-miler got to explore more of the park – maybe I will try that one next year? I had never been in Happy Hollow and it was a bit difficult with some cobblestone and grass running in addition to the paved path but the coverage of the trees was a welcome break from the sun!

I was aiming to finish in under 35 minutes which allowed me to fade. I was secretly hoping to break 32 minutes which my trainer told me I could manage but I didn’t want to get my hopes up. After the first mile pace time was announced in my ear (using the MapMyFitness app), I thought I had gone out too fast! The voice said my first mile was completed in 8:54! So I forced myself to slow down – worried I would burn out before I finished. I slowed to what I thought was my normal training pace but at mile two the voice said I had completed a 9:34 mile. I did some quick math and realized if I picked it back up, I could potentially break the magical 30 minute barrier that I thought was impossible.

The race ended on the baseball field which was incredibly cool. As I finished a 9:20 third mile, I realized I would be cutting it close. It was difficult to re-motivate my legs which had enjoyed slowing down but I pushed hard during that last tenth of a mile. As I rounded the outside of the park, I pumped my legs, racing through the parking lot and onto the field. Forgetting about the difference between chip and gun time, all I saw was the clock counting down at the finish and knowing I had less than 20 seconds to make it over that finish line to get an under 30 finish. That last stretch was an 8:52 pace and I did it!

The gun time was 29:52 but the actual chip time was 29:23 which was than I ever imagined I could complete a race. Some people may dismiss my 9:18/9:28 average pace (per GPS/per race results – pace changed based .07 mile difference extra distance dodging walkers) however I am still, weeks later, fully acknowledging how far I have come. And knowing I slowed down in mile two gives me extra motivation in upcoming 5ks to see how much more speed I can bring!

I am definitely doing this race again next year. Even if I can’t pose with the WORLD SERIES CHAMPIONSHIP TROPHIES again, it was a fabulous local race capped off with an evening of baseball and family time. Can’t ask for a better day!

All decked out in Orange & Black at the starting line!

This entry was posted on July 14, 2014 by uncoveringfood. It was filed under Fitness and was tagged with 5k, baseball, empowerment, Exercise, Physical Activity, race recap, running.