A few weeks ago I mentioned having a homework assignment to increase my entrees during a challenging day by one higher than my highest. That meant having SIX HMR Program entrees in addition to the rest of my Healthy Solutions prescription of 3 shakes and 5 servings of fruits/vegetables.

That number seemed outlandish. Grotesquely outlandish. But I was determined to complete the assignment and to learn from it.

So I started my morning with a double-entree. I figured if I had two in the morning, I would already be well on my way to completing the mission. And then I could continue my regular schedule, inserting a few more entrees in throughout the day.

I ate a combination of turkey chili and chicken creole that morning. It was an odd but not off-putting combination. I had a microwave handy and knew I wouldn’t eat the creole entree cold, so I wanted to take advantage of this opportunity. I threw on some cajun seasonings and a couple dashes of hot sauce, and ate it while sipping a cold brew coffee.

A couple of hours passed, and I was scheduled to have a snack. Veggies with a lentil entree as a dip. Only I wasn’t hungry. I was still full. I realized I wasn’t even close to hungry until significantly later than I normally would be. And I normally eat more food in the first half of the day than in the second. It was amazing!

Upon reflection, I realized I had never tried a double entree in the morning. I often have entrees in the earlier half of the day, I don’t have an issue with a lasagna for breakfast. But because I wanted to space entrees out in the day, to ensure I had one in the afternoon or evening, I would refrain from front loading my day with entrees. However, since I had been challenged to fit so many into my day, I didn’t hold back. And I was pleasantly surprised with the results!

The extra fullness was powerful. I was able to power through my day in such a manner that when the next day began, I started it with a double entree too! I walked thousands of steps that weekend and never had anxiety about food or felt a tinge of hunger. When faced with environments full of out-of-the-box temptation, I didn’t feel tempted because I wasn’t hungry.

While I probably won’t eat six entrees in a day again, or if I do it will be rare, pushing myself out of my comfort zone allowed me to find a new comfort zone. I realize a double entree is still fewer calories than a couple of slices of pizza, and a heck of a lot more filling. That the crowding out effect is real and that I shouldn’t be afraid of an extra entree to kick start my day.

With this in mind, I wanted to share my current favorite double-entree combo. And I would love for you to share yours as well. I know there are a lot of them out there I haven’t tried and I’d love to hear about them!

You will need a bowl big enough for two entrees (I learned this the hard way!). You may include optional seasonings like Molly McCheese or an in-the-box ranch dip seasoning mix (just a 1/4 tsp of the powder on top of the bowl after cooking) however I like this one pretty simple.

Begin by scooping the chicken pasta parmesan entree into the bowl. Add the rice & beans as well as all of the BBQ sauce from the BBQ entree. You will want to scrape the sauce off the piece of chicken.

Dice the chicken breast up and mix it into the bowl with the other ingredients. Cover bowl and microwave for two minutes. Top bowl off with a healthy dose of Franks Buffalo Sauce and enjoy! INSANELY filling! 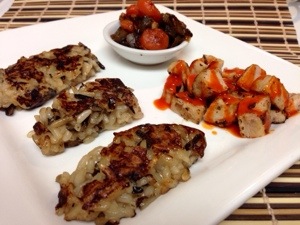 I have been in a delicious rut and it’s not going anywhere any time soon.

Savory chicken entrees are some of the most versatile of the HMR line and let me share my recent staple fix.

Pan “fry” the rice in a nonstick pan. I spritz the rice “cake” with two spritzes of Bragg Liquid Aminos to flavor it but sometimes do it plain. Often I can “cut” the cake like pictures into three but often it just ends up a delicious mess of rice.

Chop up the chicken tenders and pan “fry” until brown and then drizzle Frank’s Red Hot Wings Sauce (the one that’s zero calories – thank me later).

Finally, pan “fry” the veggies with a dash of low sodium soy sauce and a very light sprinkle of Chinese five spice.

Seriously the best fix ever!