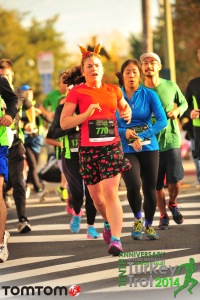 Last Thanksgiving I was two weeks into the HMR Core program and planned on waking up early to cheer on the runners going past my apartment complex. Instead I stayed curled up on the couch enjoying a shake and watching the parade on television. My family went on a one mile walk that evening and I thought that was a lot of activity.

This year was going to be different. Several coworkers and I planned on running the Turkey Trot when our school had made the announcement we would try to get enough registrants for a company tent (we didn’t unfortunately) and a number of friends also signed up to run or walk either the 5 or 10k.

As debate season stretched on, I made my goal just to finish the 10k giving it my absolute best but my primary focus was having fun, not trying for a PR. I started talking to friends and was excited to have several friends who wanted to run with me! I have always felt too slow for most of my runner friends so it was exciting that I might start and finish with people I knew.

I worked the parking lot for packet pick-up the day before the race, so I already knew to expect an insane number of people on race day. Luckily the 10k started 40 minutes before the 5k which meant most of the crowds would arrive after we started.

My friend Susan met up at my apartment and we did a slow mile jog to the starting area in order to warm up for the race. We met up with our friends Julie, Pete and Kim. Susan and Kim were running the 5k and Pete and Julie and I were running the 10k. We met up in the front of the 8-9 minute pace area. There weren’t walled corrals and it was self-seeding but wearing bright colors and identifiable head gear made it easy to find each other. Check out my turkey legs!

The race started and somehow we ended up near the very front of the 10k starting line (less than a minute between gun and chip time). I was hoping to keep a sub-9 minute for as long as I could without making it impossible to breathe because I knew I had been doing it on my own time and now I had friends who could help me. In fact, every time I felt myself slowing down, one of them would pull slightly ahead which helped me do an internal check and realize I was totally capable of maintaining the faster pace. Gotta check the internal laziness sometimes! 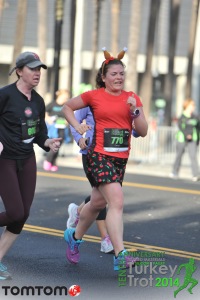 We race along folks holding signs and weaved around those slowing to a walk. Most of the 10k felts very similar to the Rock and Roll half course (well for the first segment) which helped me feel confident in my pacing.

When we reached the SAP center, we saw hundreds of 5k folks who had arrived who were trying to walk to the start line. Unfortunately it meant traveling through the height of the 10k runners as there wasn’t another way to get to the start from where they parked! A friend later told me she felt like she was playing frogger to get to the 5k (her first time at the Turkey Trot as well).

My shoe was untied at mile 5 which definitely meant a quick safety stop. But that quick pause helped me assess my energy level and I picked up the pace as we wound around through the neighborhood I call home.

During that 5th mile, Julie reminded me where I was at one year ago and suddenly I felt alive. I tried to hold back tears (don’t want to get dehydrated!) and instead funneled the momentum into my legs. I continued to push through in mile 6, shaving over 30 seconds off the previous mile and running my fastest mile in the race!

As we got near the finish, I wanted to push for a finishing kick but didn’t think I had it in me. Julie kept up the positive cheerleading she had been giving throughout the race and told me to follow her. She picked up the pace and I followed as we pushed through and finished strong. 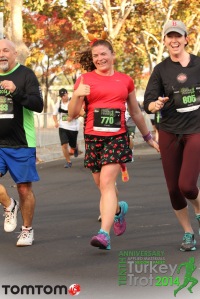 I looked at my Garmin when we crossed the finish and I had shaved over three minutes off my 10k PR from September! I couldn’t believe it! I also shaved 5 seconds off my 5k PR from October! My official finishing time was 54:59!!!

Aside from needing water right away from the cold dry air (I didn’t bring my own hydration on the course like previous 10ks), I felt amazing! When we walked through the finishing chute area and saw the start for the 5k, I almost wanted to join friends there and go around again! 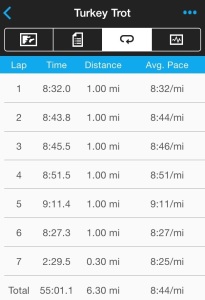 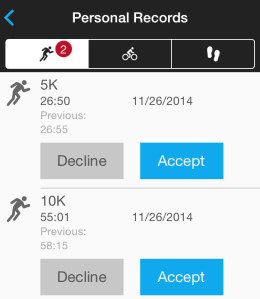 We made our way to the finishers village where we found a plethora of supportive snacks and then wandered out the other side to cheer on all of our friends at the 5k including my husband who rocked the race (and almost missed seeing me cheer for him). It was so much fun and I stayed and cheered the runners and walkers until the last few folks at the end passed by.

The group that puts on this race also puts on the Santa Run 5k on December 14. I can’t to dress up and enjoy another holiday jaunt around downtown San Jose! 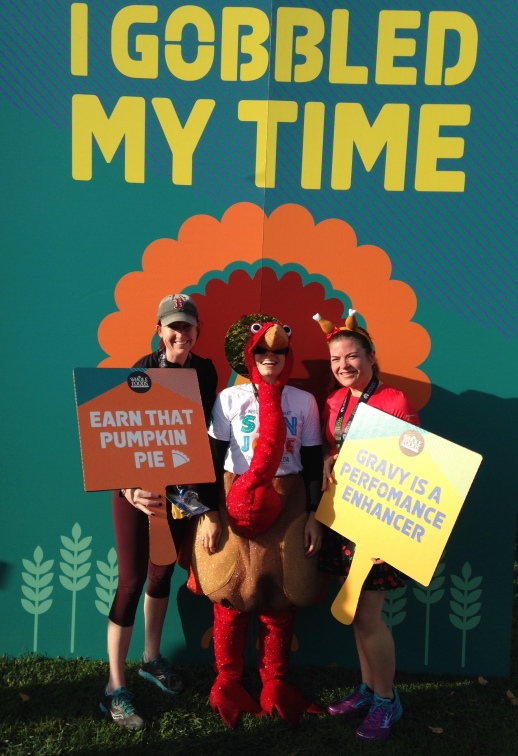 This entry was posted on December 9, 2014 by uncoveringfood. It was filed under Running and was tagged with 10k, Exercise, friends, race recap, running, Turkey Trot.